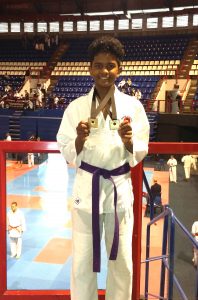 Mohammed Ridwaan Kai and Musheera Kai competed in the Gauteng JKA Karate Championship, which took place in March 2017, at the Standard Bank Arena.
We are very pleased to announce that Mohammed Ridwaan Kai has yet again achieved Gauteng Colors for 2017. He went on to win 2 gold medals for both Kata and Kumite in the Boys U/15 division, and has been selected to represent Gauteng in the JKA National Karate Tournament to be held in May later this year. He has been unbeaten in his past five competitions, winning gold in both Kata & Kumite over the last 5 years.
We are extremely proud of his achievements and look forward to hearing of his successes at the JKA National Championships in a few weeks’ time!